What do you get if you combine a chemtrail loon, a TI, a bad temper, and homoeroticism?

All photos and screenshots are legally reproduced here under the Fair Use doctrine.

You get Michael D. Fleming of Huntsville, AL. 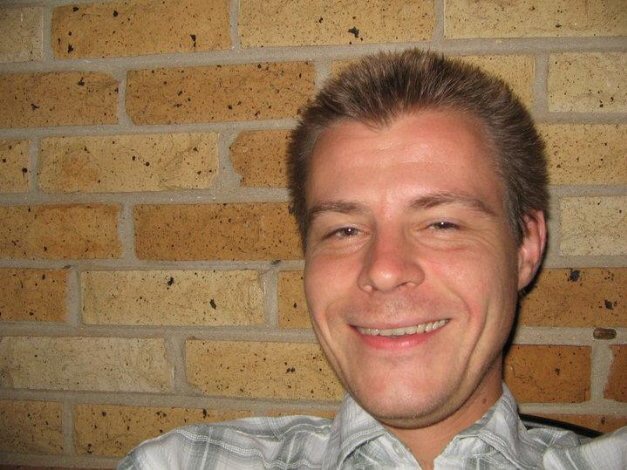 Fleming – where to begin? He thinks “chemtrails” are killing millions of people yearly and he is mad as hell about it. The unnamed drone operators supposedly behind the program as well as actual scientists who study climate change and geoengineering (who he thinks are part of the chemtrail program) are guilty and deserving of death to Fleming.

The white lines in the sky are ordinary contrails. There are proposals to “geoengineer” the Earth’s atmosphere to counteract climate change but these proposals are purely academic in nature: there is still much debate about their effectiveness, safety, and so forth. There are no climate geoengineering programs currently taking place.

Nonetheless he is angry as hell about the geoengineering that he thinks is taking place. He names various chemtrails debunkers from Internet forums and calls out Harvard scientist David Keith (who is one of the lead researchers studying geoengineering) and offers $1,000 for likeminded people to go out and fetch these individuals so that he may have his way with them: 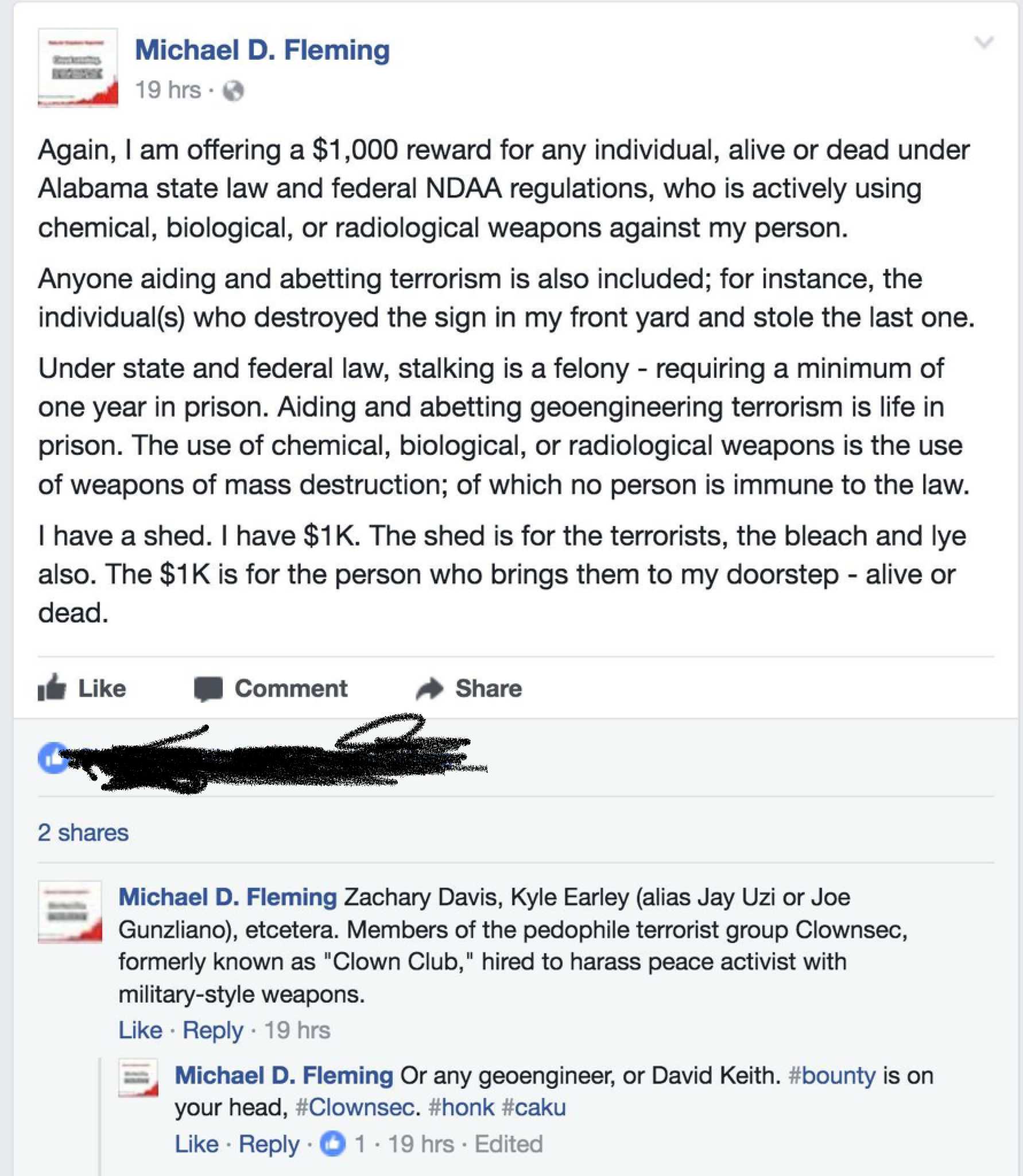 As this first image alludes, it’s not just the chemtrails bothering him. He thinks there is a stalking / harassment program targeting him for his anti-geoengineering “activism”. This is where the TI label gets applied to him. I’ll admit that he is not a garden variety TI. He doesn’t hear voices in my head to my knowledge (well, he hasn’t admitted to such). He does claim that he is being attacked with radiation: 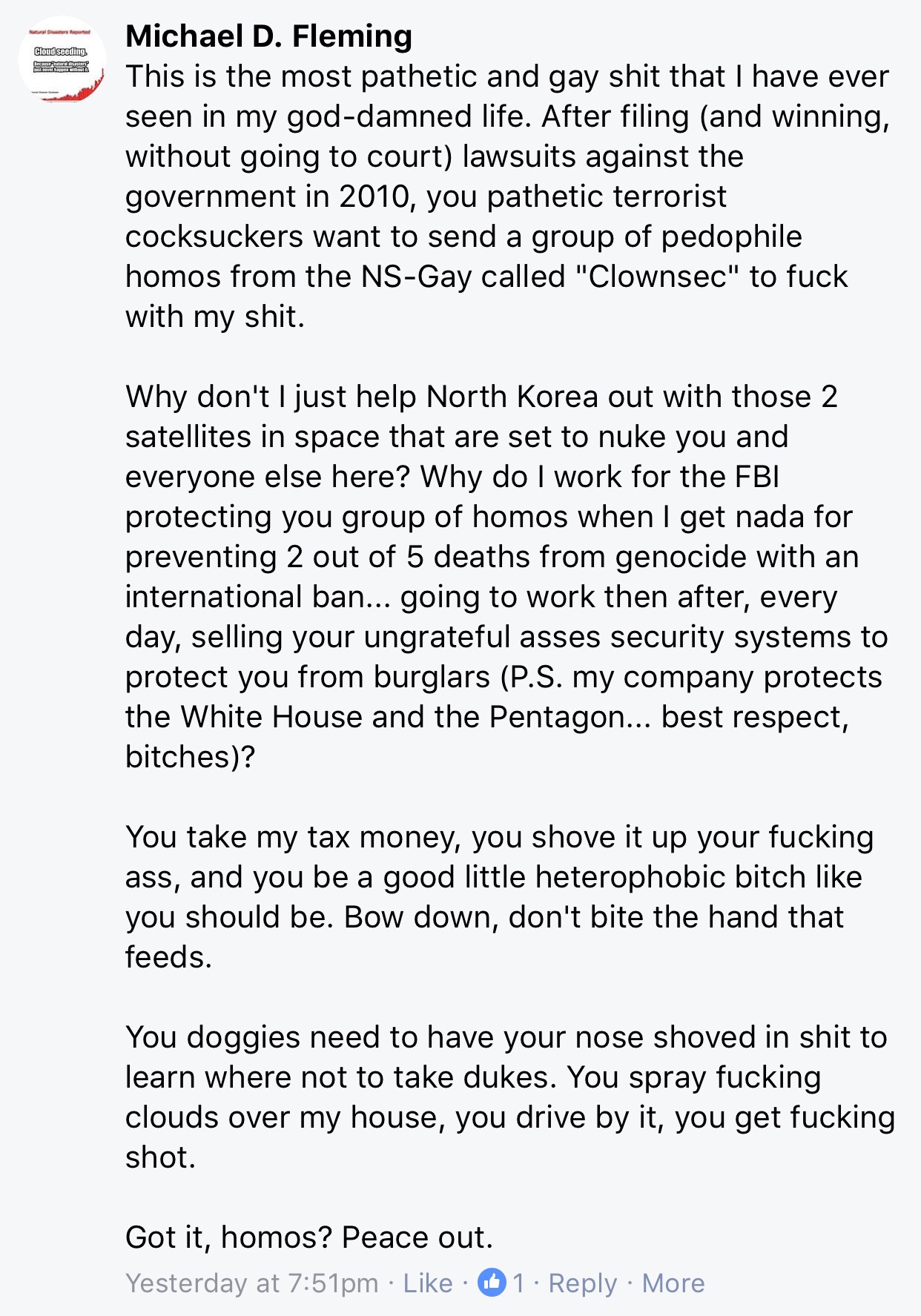 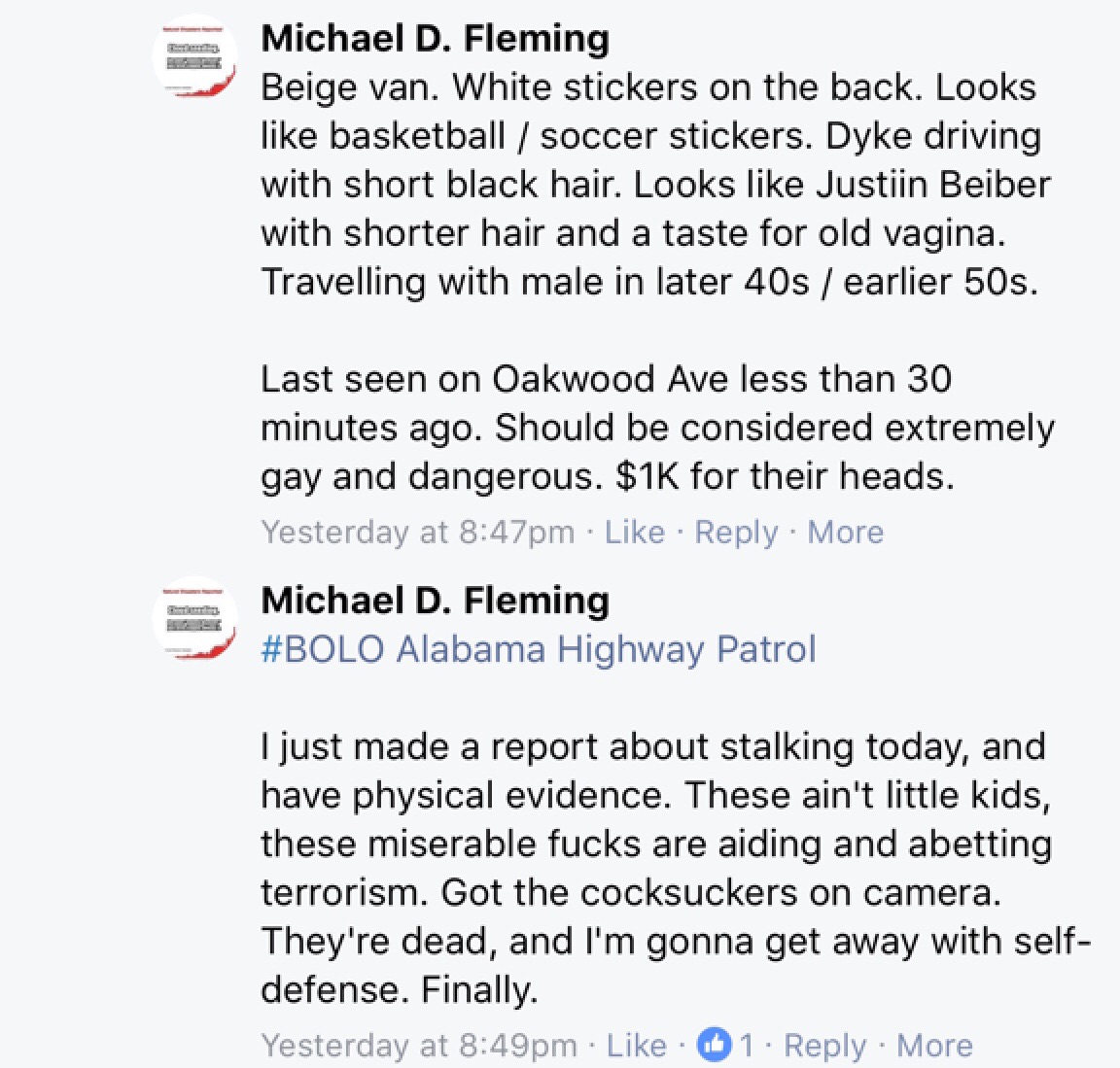 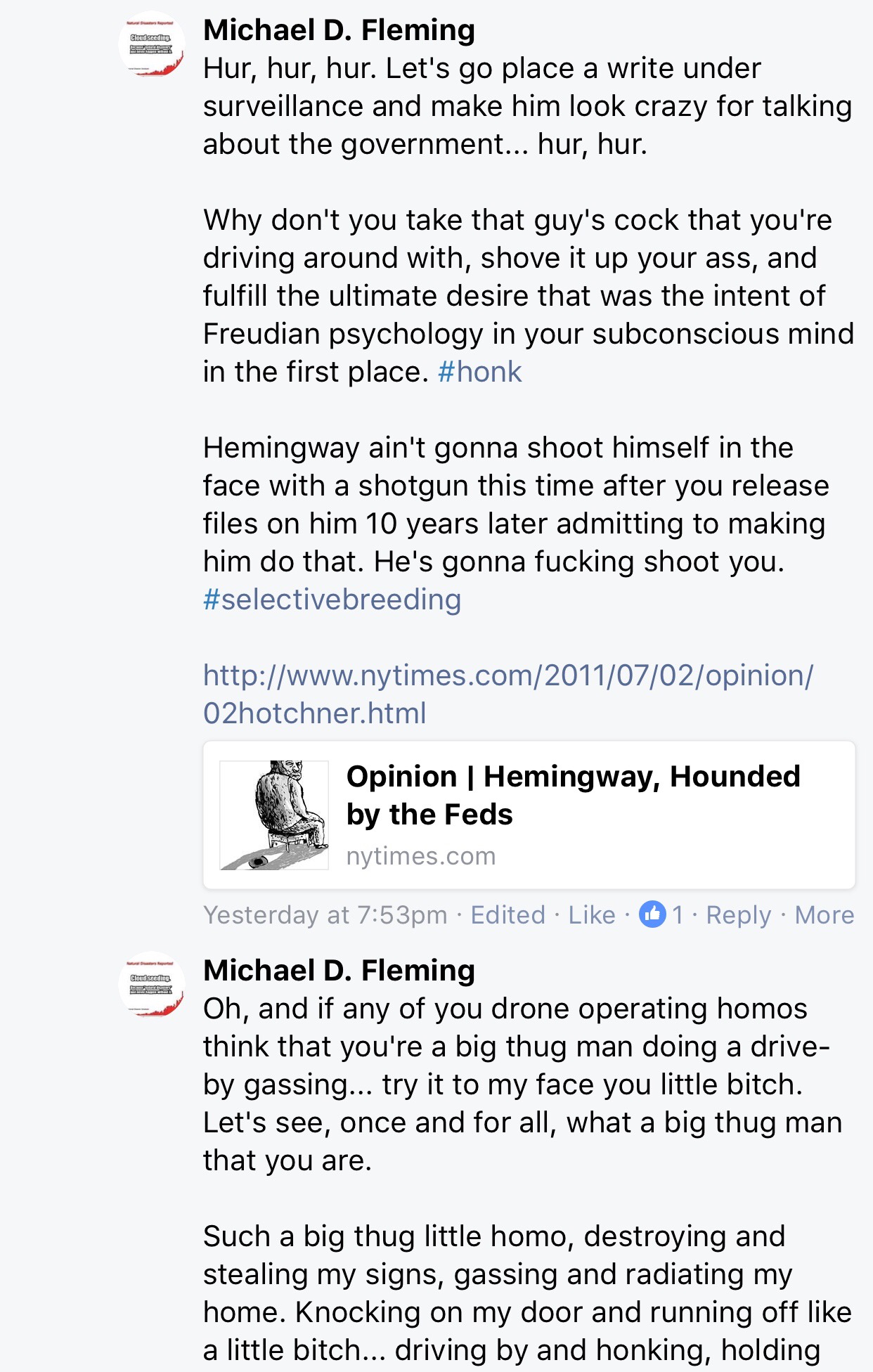 The reality is: nobody is stalking him. Fleming’s contributions to society and his “activism” are only noteworthy for its absurdity and comedic value and have gained him no enemies – apart from his death threats which are hopefully being handled by the legal authorities.

I doubt David Keith or various Internet debunkers are sending people in beige vans to surveil him.
These screenshots (above) all come from a recent but now-deleted post.

Below are some older posts and comments I selected showing his obsession with gay people and gay sex acts: 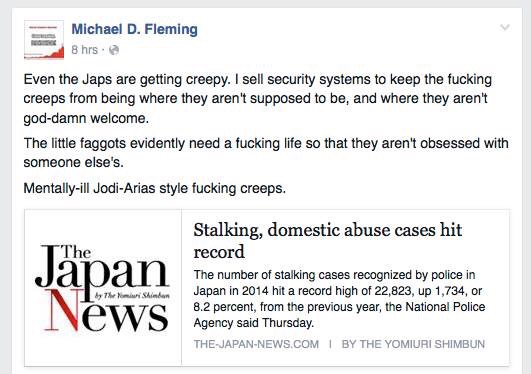 Yeah, Fleming is really super obsessed with that topic. Why? I don’t know. Maybe he can tell his psychiatrist.

If you happen to purchase one of his books (I hope you don’t honestly) and decide to leave an honest review, expect a hostile reaction from the author replete with legal threats: 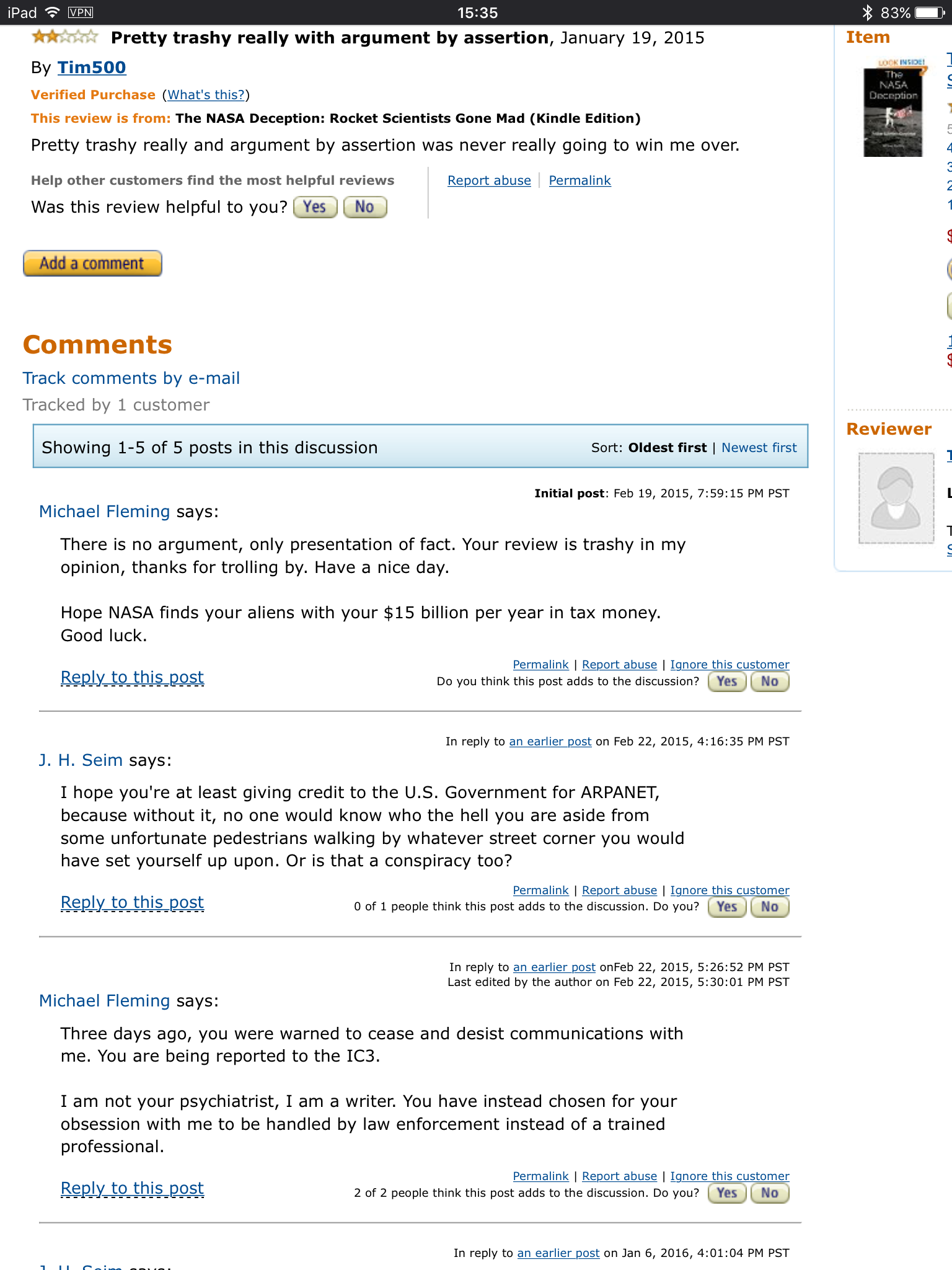 And finally – perhaps the best of all – are Fleming’s parodies of various pop songs with themes about geoengineering. They are hideous and awful but that’s what makes them so god damn funny. Here’s a selection of them. More can be found on the YouTube channel that posted these.

By the way – I have an expectation that this article will appear in Google searches for Michael Fleming. As such I expect Mr. Fleming himself to have a hostile reaction to this posting and threaten me with legal action. I am not worried as I have a competent lawyer on retainer and know well that everything posted here was done so legally. There is no legitimate claim to copyright infringement, defamation, or harassment nor do I require permission to post this.

I don’t really know what to say other than messing with your hormones without good cause can cause all sorts of other health issues. 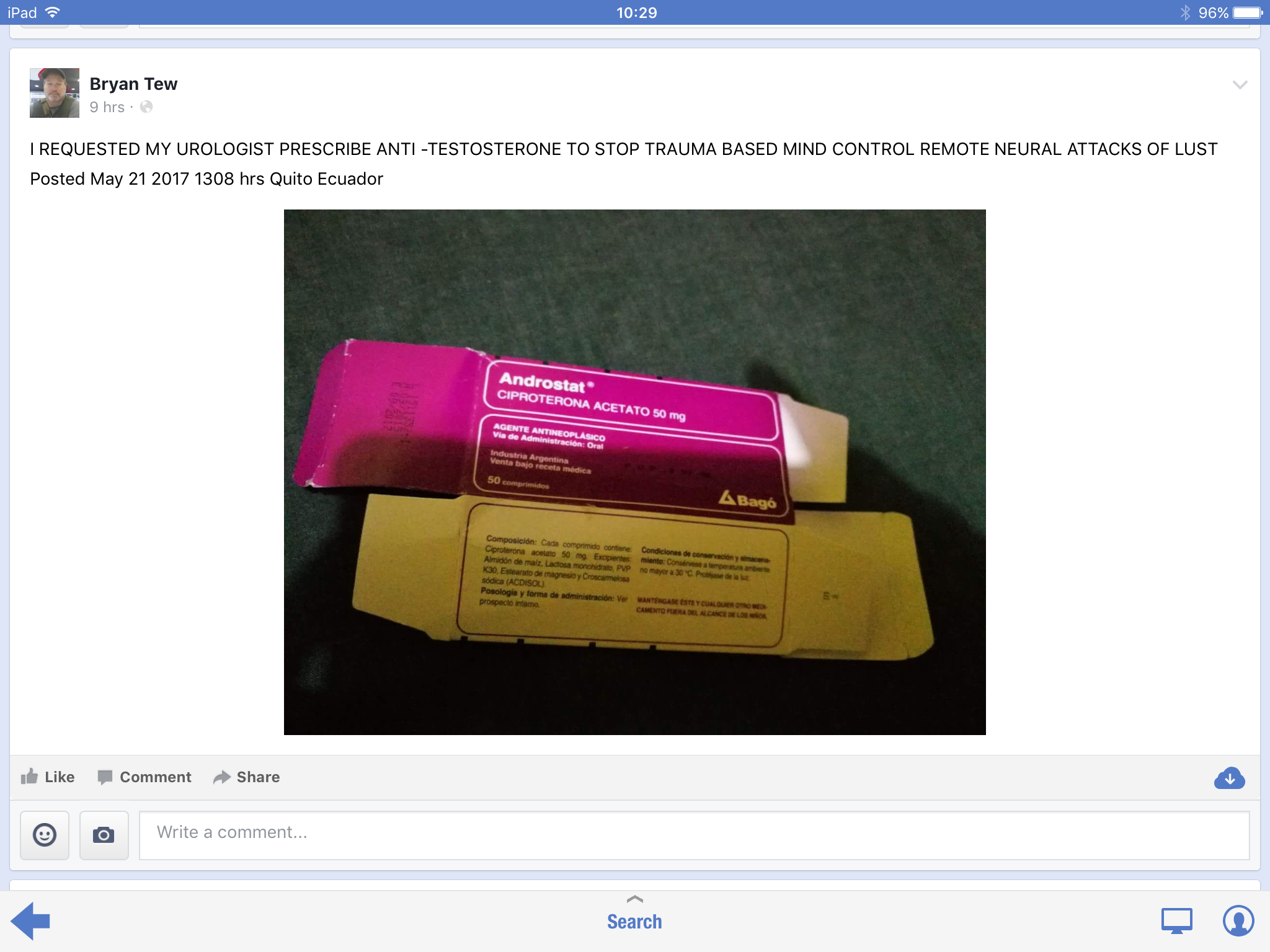 Nutter discusses good vs. bad reptilians and the chemtrails

Whenever Bryan says he is the victim of random harassment and violence that is probably a lie most of the time. He frequently goes up to random and innocent people that he deems to be part of the “organized stalking program” and harasses them himself.

In this video he actually goes up to this person and touches him. He quickly runs off when the guy stands up and makes like he is going to return the favor.

Brief recap of some events that happened: Bryan Tew carelessly stepped on some guy’s toes (literally) which caused the guy to get upset and allegedly threaten Bryan. Bryan immediately started filming the interaction and yelling for police to help him. As far as I know nobody got in trouble. 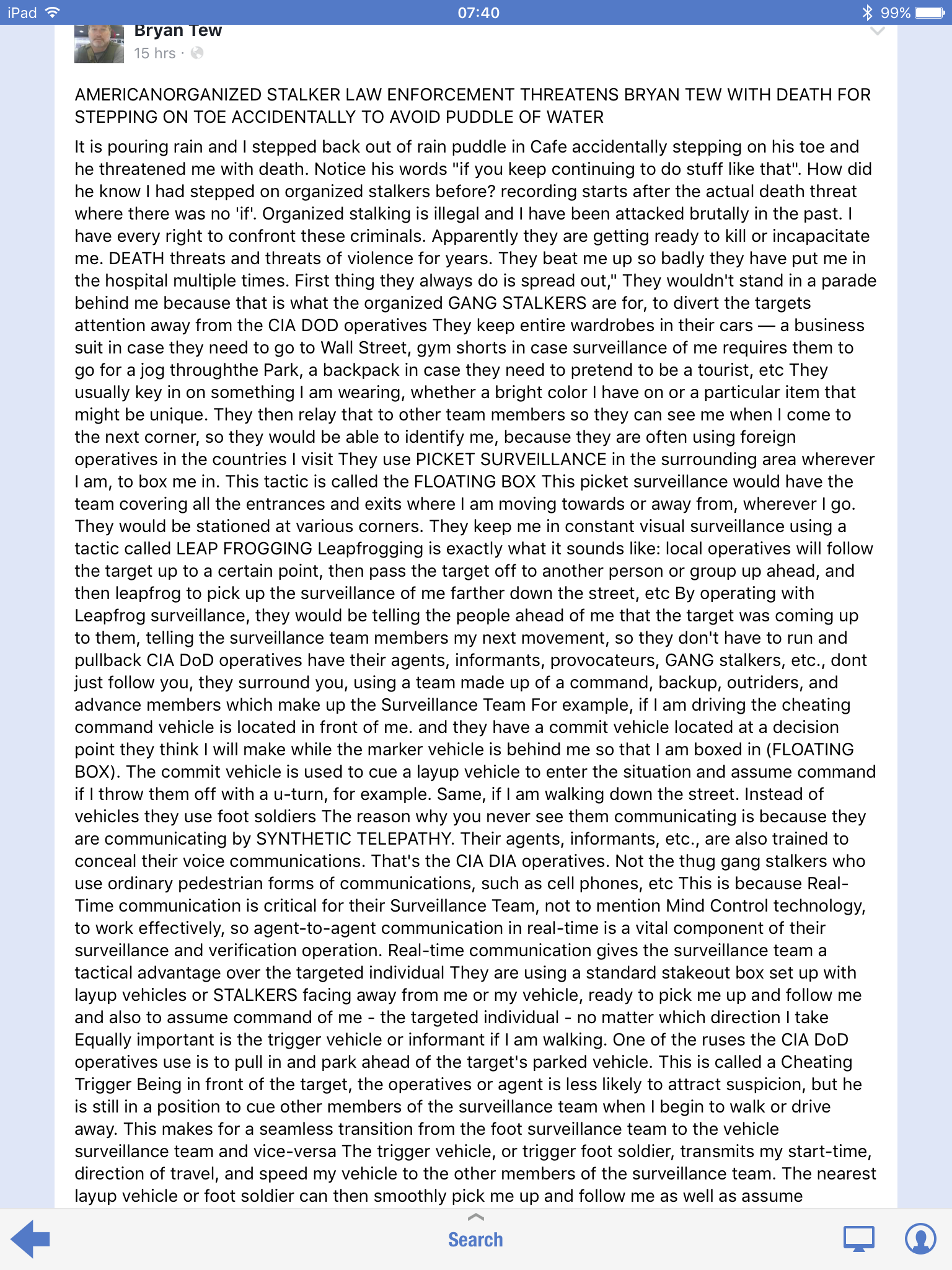 A day or so later (today) his videos of said interaction was flagged (it wasn’t me, I promise, I didn’t even have a chance to watch them!) and Bryan claims that he is now forbidden from posting new videos as a result.

Having gone through something similar with my blog, I completely understand how arbitrary Google’s censorship can be and how their system of appeal is essentially non-functional. That is the extent of my sympathy for Bryan. 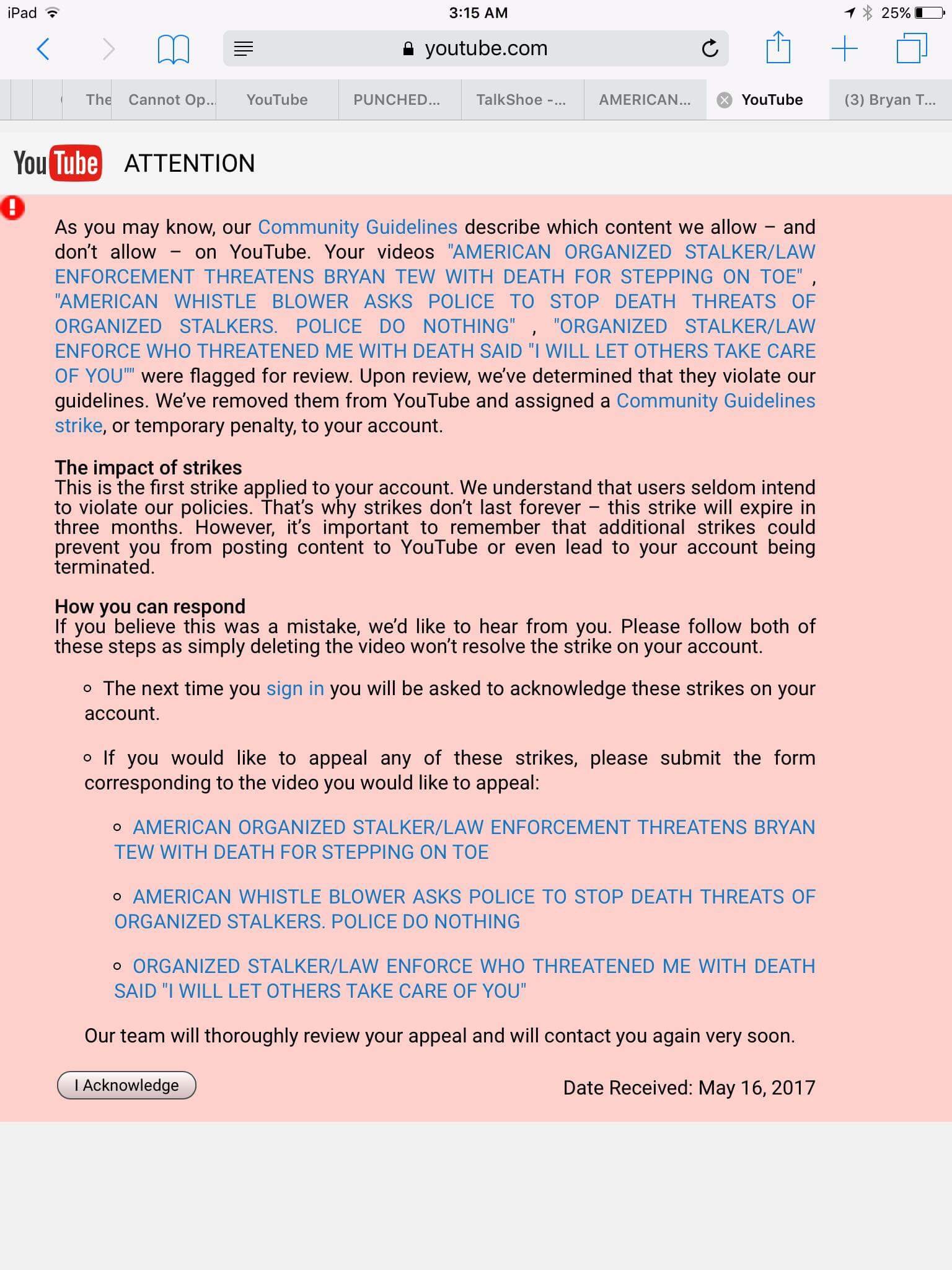 PACTS, otherwise known as “People Against Covert Torture and Surveillance” is a support group for TIs run by Derrick Robinson out of Hemet, CA.

I can’t say that they’re really noteworthy apart from apparently being a sizeable group of TIs who regularly hold talks and conference calls.

Derrick also puts out a weekly newsletter that contains TI “news”, schedules of events, personals ads, suggestions, and etc. The newsletter is mildly entertaining and informative to keep up with the current state of the TI community if you’re wanting to do that. The conference calls can also be entertaining.

Here is the pamphlet that Derrick just put out:

With all that said, there is always some drama surrounding TIs. Our favorite TI Bryan Tew thinks (from his elite training as a government contractor trained in lie detection) that Derrick Robinson is a CIA agent (or something like that). Also this.

PACTS isn’t the first TI group that Robinson has been involved with. Previously he was head of FFCHS (“Freedom From Covert Harassment and Surveillance”). There was some kind of drama involving Derrick, the board, and some funds. Please note that I do not have a lot of substantive information or verification about those details, I’m just highlighting the drama and infighting.

I think this speaks for itself. 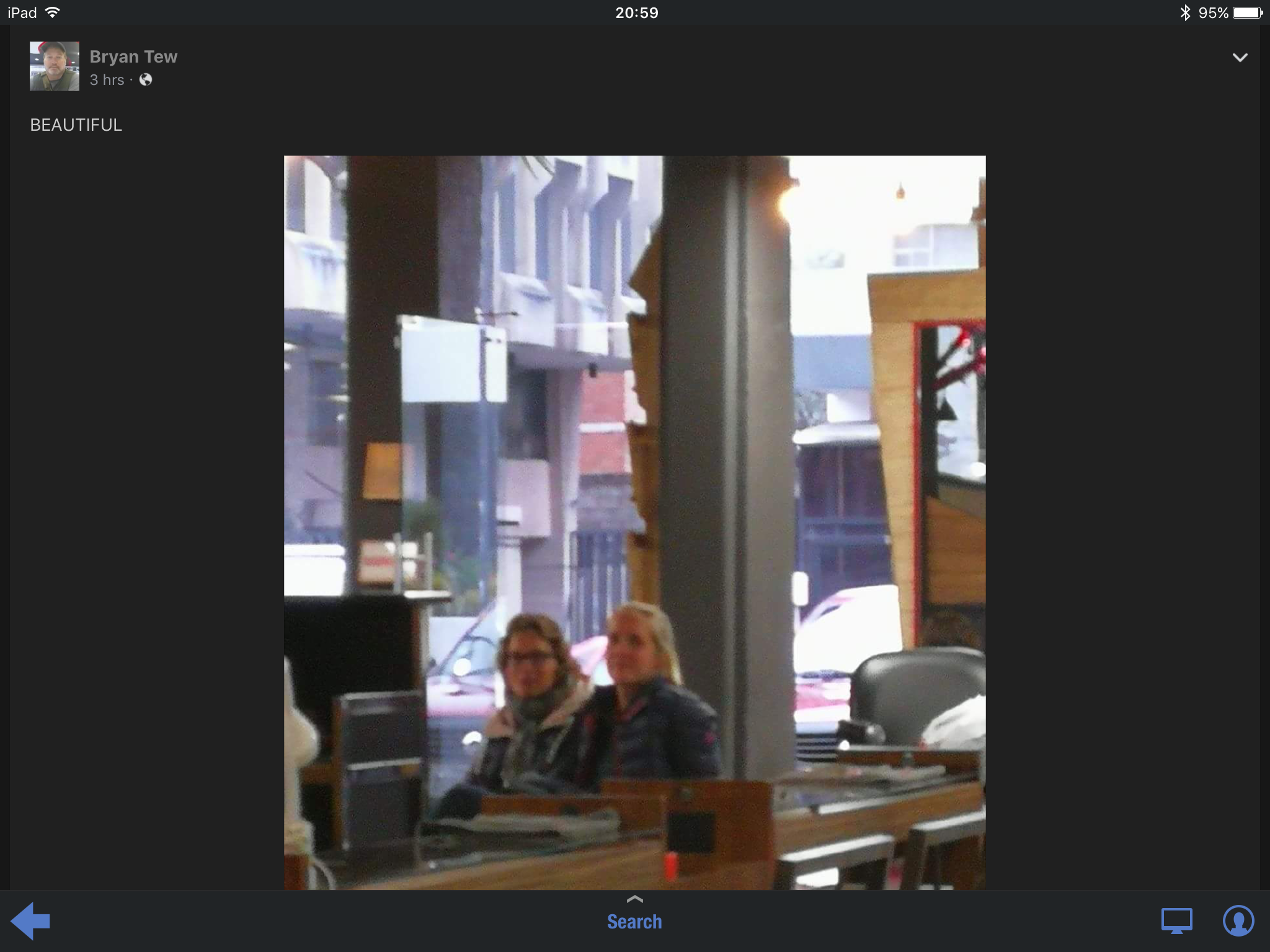 Bryan Tew thinks nearly everyone else in the TI community is a perp, thinks that only his story is believable

All of Bryan’s videos have been < 15 minutes due to a restriction that everyone encounters on YouTube. You are required to go through a phone verification to unlock this restriction. It seems that Bryan has unlocked his account and is now posting rants that go on for as long as he wants.

He also rants about Occam’s Razor, i.e. the notion that the simplest explanation is likely the correct one. The simplest explanation really truly is that Bryan Tew is mentally ill and schizophrenic (schizoaffective according to the psychiatrist that evaluated him for the State of Ohio), not that the CIA/DIA really has secret mind control rays and thousands of contractors dedicated to harassing him, all able to keep a secret about it.

Bryan, like a lot of crazy people, are simply unwilling to even consider that their mind is failing them. To accept that one’s mind is broken to the point that they can’t distinguish reality from imagination would be admitting that the life you are living is a lie – a step too far.

He lashes out at the public for being ignorant, uneducated, and brainwashed to disbelieve TIs such as himself. Those crazy TIs who believe in aliens are part of the reason why according to Bryan.

We the public are just too damn brainwashed to understand that the CIA can use radio waves to give you an erection and make you hear voices in your head. Or sends people out to steal your lunch from a seedy hostel.

Now if you want to talk to Bryan about the logistical impossibility of there being the sheer number people paid to do the things he claims *and* keep a secret, good luck. If you want to point out the limits to the laws of physics making his claims impossible, don’t bet on him being receptive.

Bryan hates skeptics and accuses all disbelievers of being government agents.

Geez Bryan, you’re an English-only speaker in a Spanish-speaking country. It’s far more likely that there was a misunderstanding than the CIA/DIA getting to her and making her produce too-heavy signs.

I think it’s hilarious that Bryan lowered the bar even further and became one of those sign-carrying / phamplet-passing-out lunatics in the street that absolutely no one takes seriously.