In the bizarre belief that he has a real shot of winning his asylum claim from the very same “peasants” who he accuses of being complicit in supposedly torturing him, Bryan Tew has returned to Quito, Ecuador.

As usual, he has problems upon his return. He runs into people and accuses them of harassment and stalking for not getting out of his way.

So I am inferring from this post that the “government perpetrator” was a police investigator.

For the record, I’m not accusing Bryan Tew of any crimes, at least I don’t see enough evidence to do so at this time. I’m willing to believe that Bryan is just a crazy guy who thinks everyone is stalking him and he wants all those cameras to record his interactions with those supposed stalkers.

This presumably happened because he reported all of his expensive A/V gear as stolen and his age, nationality, and travel destinations also match those of many previous child sex tourists. 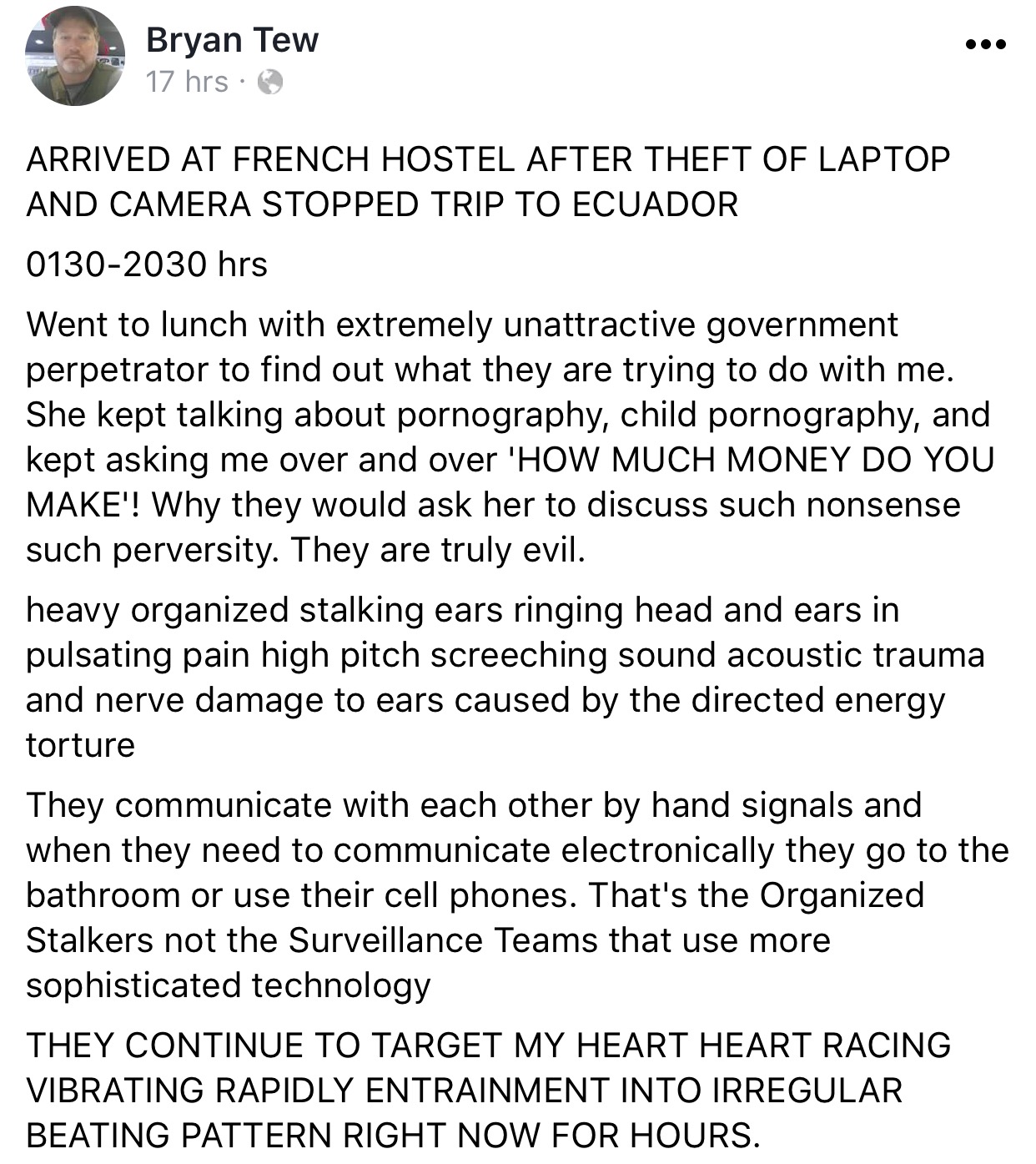 More homocidial TIs in the news.

TIs, you are mentally ill and need help. It has nothing to do with mind control. Nobody is following you. Get the counseling and the medication you need to become well again. That’s all we ask of you.

Amber Lynn James told investigators she believed she was being followed and had been watching “conspiracy type” videos on youtube.com related to politics and “chemtrails.”

These videos “seemed to have created some anxiety for her,” a Sheriff’s Office detective wrote in charging documents. James also said she had used marijuana the night before and “periodically” takes prescription medication for anxiety.

Bryan Tew cut off from Social Security, luggage stolen, mad at other TIs

Screenshot, video, and text below:

Social Security has cut off Bryan Tew for either an invalid mailing address or invalid payment information. Rather than realizing that he needs to update his profile, he blames the CIA/DIA.

He is trying to get back to Ecuador to try to continue his asylum application but does not have enough money.

Bryan also had thousands of dollars worth of camera and computer gear stolen due to his inattentiveness.

You can tell he’s unhappy about the whole situation to the point that he is taking his anger out on other TIs.

I also can’t help but to laugh at him when he raises his voice and stares at people passing by who are unintentionally disrupting his video. You can tell he has a very short fuse and it wouldn’t take much to get Bryan to blow up at someone.

He still calls Robert Duncan a “Dr” despite Duncan not having a PhD on file at Harvard and never producing any documentary evidence.