So I wanted to start this blog off with “Bryan Tew is not feeling well” but that’s pretty much every day with him. However it seems he’s much worse off than normal.

(If you don’t want to read the blog, just scroll down for a bunch of embedded Bryan Tew videos from the last several days)

His usual arrogant defiance has turned into pathetic whimpering, crying, and begging. He can’t sleep. He hasn’t slept for but 8 hours in the past 9 days (he says).

He’s been in and out of several ERs and clinics trying to find Xanax but it seems he can’t get it. I’m not surprised; the DEA is cracking down on doctors who overprescribe controlled substances. It’s not like the third world where you can get whatever you ask for and there is no accountability.

He has probably been referred to a psychiatrist (who I think are the only people who will dispense Xanax) but refuses to go. He doesn’t think anything is wrong with his mental condition.

As a side note, I talked to a friend about Bryan and he thinks Bryan is going through Xanax withdrawal. We know Bryan has been taking liberal amounts of Xanax while he was overseas. He’s run out of Xanax and the docs here won’t prescribe it. It’s just a theory, but the symptoms do match what he is describing.

Wow he looks totally whacked out. This is the worst I think I’ve seen him:

He’s been in and out of hospitals a few times over the past few days. He normally doesn’t tell his “story” to medical staff, out of fear of being thrown into the psych ward but here he goes!

So I was hoping to obtain a copy of Bryan Tew’s arrest report from his altercation last month at the San Diego VA hospital. Unfortunately the UCSD PD refuses to provide it, citing privacy concerns.

However, they did provide me the bare minimum of details that they are required to provide under California law.

I’ve attached the incident summary and a screen grab of his citation (from his earlier video), below.

In regards to his upcoming court date, he has directly stated that he will not show up for court, meaning he will be given additional charges for failure to appear. A screen shot of his YouTube comment where he says this is included below. 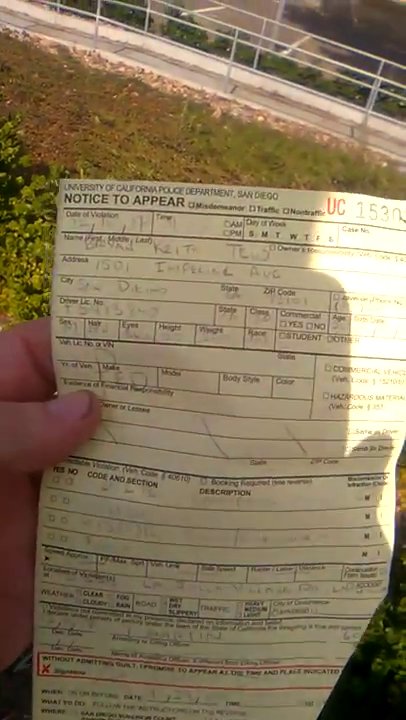