Thanks to Wet Nayrb for bringing this to my attention.

The Mandela Effect is a phenomena where people misremember past events. A significant number of people are convinced that Nelson Mandela died in prison and had no idea he was alive until very recently – he died for real in 2013.

When conspiracy people encounter this contradictory information, they do not conclude that they misremembered or misunderstood world events. They ascribe the contradiction to scientific witchery involving CERN time machines – they believe that CERN’s activities are causing past events to change. Seriously!

Various people have extended this theory to other events. One of my favorites: I saw someone claim that Oscar Mayer (you know, the hot dog and sliced ham company) was really spelled “Oscar Meyer” and that only recently has it changed – because of CERN’s time machine.

So apparently not only has it claimed Nelson Mandela and Oscar M(a)yer, it has also claimed Brian Tew (not Bryan Tew – that’s CERN’s witchcraft) according to this lady.

This is either funny or really sad, pick your choice. It only goes downhill from here. 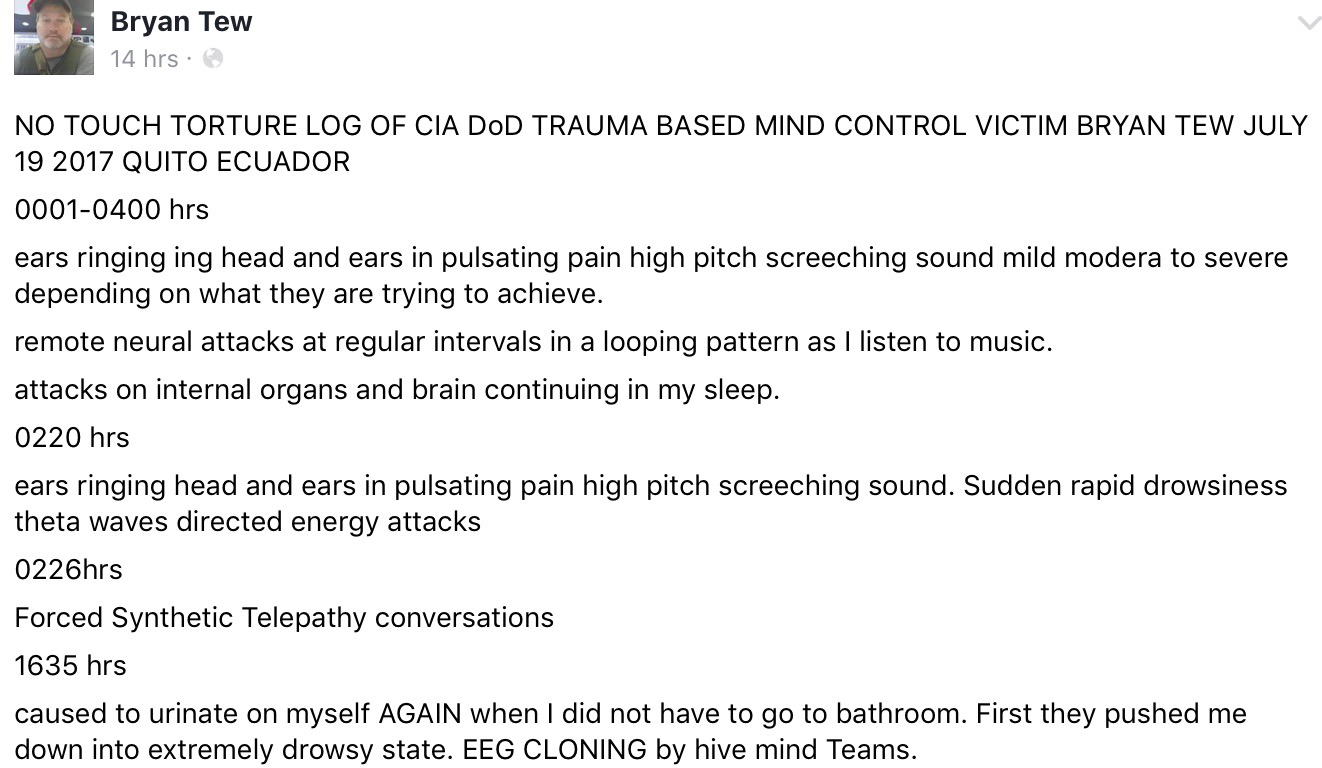 Bryan Tew loses passport, makes a jackass of himself at the police station

EDIT 2: This is an old exchange between Bryan Tew and Belgian police officers, not in Ecuador where he currently is. This appears to be a completely accidental upload by Bryan.

It’s really hard to put it all into words the amount of hilarity and cringeyness going on here.
It seems Bryan lost his passport and has to get a police report from the local police before the US Embassy will process his request for a replacement.
The police officer is requesting some basic information from Bryan (i.e. Name, DOB, etc.) and Bryan is absolutely unable to accept the fact that the officer will take down his information rather than Bryan filling out a form himself.

Anyway, just listen to it. LOL!

(EDIT: Bryan Tew deleted this soon after posting. Another copy has been uploaded to YouTube by someone, so worry not!)

Kevin Canada gets interviewed by a skeptic, proceeds to have a meltdown

Kevin Canada of TI/Mind Control/Chemtrails fame (see here, here, here, and here) accepted an invitation to be interviewed by Echoplex Media and faces skepticism and a revelation that the radio host is gay which quickly sends Kevin Canada into a meltdown.