Bryan Tew thinks nearly everyone else in the TI community is a perp, thinks that only his story is believable

All of Bryan’s videos have been < 15 minutes due to a restriction that everyone encounters on YouTube. You are required to go through a phone verification to unlock this restriction. It seems that Bryan has unlocked his account and is now posting rants that go on for as long as he wants.

He also rants about Occam’s Razor, i.e. the notion that the simplest explanation is likely the correct one. The simplest explanation really truly is that Bryan Tew is mentally ill and schizophrenic (schizoaffective according to the psychiatrist that evaluated him for the State of Ohio), not that the CIA/DIA really has secret mind control rays and thousands of contractors dedicated to harassing him, all able to keep a secret about it.

Bryan, like a lot of crazy people, are simply unwilling to even consider that their mind is failing them. To accept that one’s mind is broken to the point that they can’t distinguish reality from imagination would be admitting that the life you are living is a lie – a step too far.

He lashes out at the public for being ignorant, uneducated, and brainwashed to disbelieve TIs such as himself. Those crazy TIs who believe in aliens are part of the reason why according to Bryan.

We the public are just too damn brainwashed to understand that the CIA can use radio waves to give you an erection and make you hear voices in your head. Or sends people out to steal your lunch from a seedy hostel.

Now if you want to talk to Bryan about the logistical impossibility of there being the sheer number people paid to do the things he claims *and* keep a secret, good luck. If you want to point out the limits to the laws of physics making his claims impossible, don’t bet on him being receptive.

Bryan hates skeptics and accuses all disbelievers of being government agents.

Geez Bryan, you’re an English-only speaker in a Spanish-speaking country. It’s far more likely that there was a misunderstanding than the CIA/DIA getting to her and making her produce too-heavy signs.

I think it’s hilarious that Bryan lowered the bar even further and became one of those sign-carrying / phamplet-passing-out lunatics in the street that absolutely no one takes seriously.

This is the first Bryan Tew post of the new blog. We may not be Bryan Tew Watch anymore but his antics are still on-topic here.

Bryan spent more of his ill-gotten (IMO) disability money on signs. These are the styles of signs you might see religious or homeless cranks hold up at a street corner proclaiming that the end of the world is near. It’s unclear how much he spent on this. I can imagine the graphic designer thinking to himself “This guy is loco!” while charging Bryan with an exhoribitant amount of money that he moronically forks over. 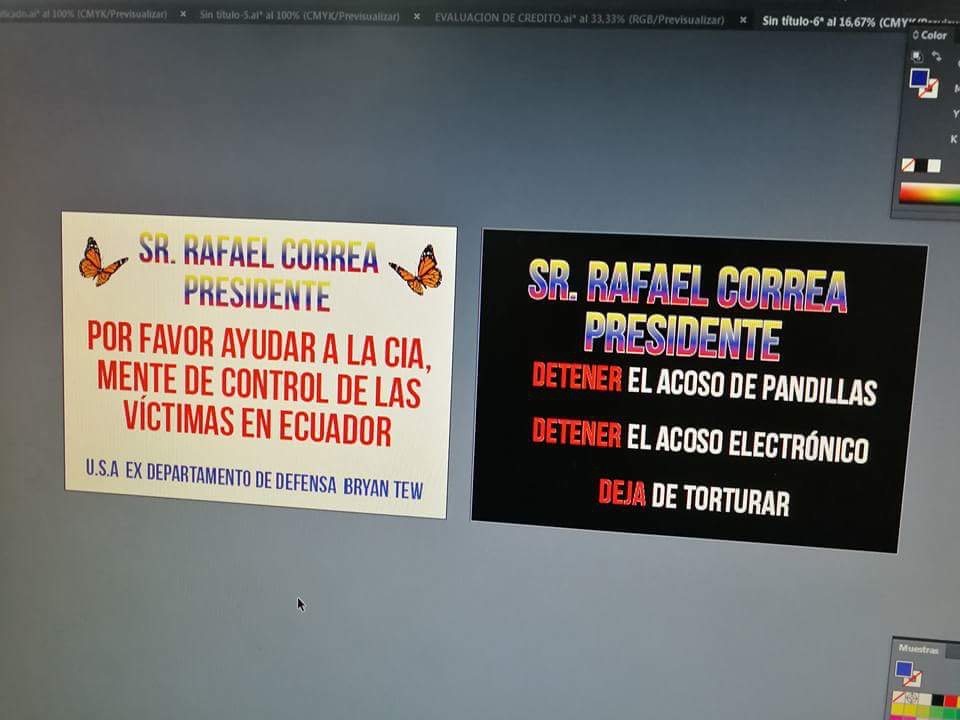 So Bryan has had repeated fantasies, nightmares, visions, or whatever you want to call it about gay people having their way with him (or vice-verse, perhaps?). A month or two ago it was something between him and the UGA football team.

I’ll be honest: I’m neither religious or have gay inclinations. The only time I ever questioned my sexuality was when I got turned on by a dude who looked a lot like a hot chick I used to know – he had a rather feminine face and shoulder-length hair. It was confusing and awkward for me. Laugh at me or with me, haha. Once I found out he was really a he, had a flat chest, and a deep voice, I lost interest immediately.

Here’s the thing: if I started feeling attracted to other dudes, I wouldn’t hesitate to explore those feelings. I’ve never had gay dreams or gay fantasies. So hence nothing for me to explore.

Is Bryan gay and not realizes it? Maybe. I don’t know. I don’t throw that accusation out at people as an insult. Bryan is a deeply religious man, to the point of admitting that he hates gay people and is happy to know (in his mind, anyway) that they’re going to hell to burn. A lot of these deeply homophobic people you see (not all of them, but many) are closeted gays and it’s sad that they can’t bring themselves to at least explore those thoughts and desires.

The other possibility is that he’s straight as can be but because of his mental illness his mind torments him with things he hates. I don’t know.

Bryan’s biggest complaints are his sleeplessness and his heart troubles. I’m not a doctor and won’t diagnose him (though I think it’s okay to speculate). I think his problems are anxiety. He’s scared and stressed out and can’t sleep. The tachycardia is just anxiety. It’s a vicious cycle where all the symptoms feed into each other the longer he goes without proper treatment of his underlying psychological problems.

He has been taking Valium off and on throughout his journeys around the world. This is apparently something recommended to him by “Dr.” Robert Duncan, the guy who pretends to be a former CIA agent and abuses his Harvard Bachelor’s degree in Computer Science to present himself as a credentialed and prestigious PhD scientist.

The Valium doesn’t help him too much. Benzo tolerance, perhaps. Now he’s taking Xanax, perhaps at the same time. Either way, benzos are not to be taken long-term. They can become addictive – you take too many for too long and suddenly you find you can’t quit them without becoming sick due to withdrawal issues.

He is also now on a beta blocker. This is advice I gave to him a long time ago in response to one of his videos about his blood pressure and pulse rate videos. He didn’t care for my advice. BBs can be useful for both BP/pulse issues as well as anxiety. BBs are safer to discontinue (though it is suggested that you do not simply stop taking them abruptly without a doctor’s guidance, but the consequences aren’t going to be severe unless you have heart disease that you’re using BBs to treat).

Michael J Murphy: An introduction and a startling discovery!

Michael J Murphy doesn’t call himself a TI but he shares some of the traits of TIs, namely the constant paranoia and delusions. Michael’s claim to fame isn’t so much the delusional behavior but rather his time in the spotlight being a prominent chemtrails activist.

A third movie was in the works: “An Unconventional Shade of Gray” of which he has raised nearly $15,000 for since beginning his GoFundMe in 2015. No recent updates have been given by Michael on the status of the film or the money he received.

There are many rumors about his personal life and they all center around drug use. Cocaine or methamphetamines is what I hear about. People claiming to be old friends say it is meth.

Whatever the case may be, there are arrest reports indicating drug possession. He has devolved from a run-of-the-mill conspiracy theorist into a rambling and paranoid nutcase, possibly due to some kind of drug-induced psychosis.

His Facebook page offers near-daily posts of paranoid and rambling diatribes. Many of his posts are variations on a long-running theme that his family has concocted an elaborate scheme to deny him rights to inheritance from various companies that his family is supposedly involved with, including Murphy Oil and Motorola.

Other posts claim he is the CEO of California or that WWIII is starting in his current town of Inglewood, CA. In this particular gem, Michael claims to be the son of JFK: He occasionally posts videos too:

So in conclusion, we see another psychologically fucked up person. People like Michael Murphy are fucked in the head due to drugs. This contrasts to our favorite TI, Bryan Tew, who probably just has a genetic predisposition to schizophrenia-like behavior.

Many people have tried to get help for Michael. Friends and family have begged him to enter drug rehab but he refuses. He is currently homeless in Inglewood, CA, possibly living off of the funding he has raised for his yet-to-be-produced movies.

So as you all have seen we were shut down by Google under the false claim that we were harassing Bryan Tew.

A few weeks have gone by and I have returned with (1) New hosting, (2) A permanent domain name, and (3) A change in name and focus.

(1) and (2) mean I have more control and insurance against this happening again. This new arrangement does notÂ guarantee being booted again. It just means I won’t lose my content and can easily move the blog elsewhere quickly.

(3) is a personal decision after some reflection. There are a lot of crazy people and conspiracies to document. Bryan is just one of many. This is subject to change.

Here are some of the boring details of what allowed this toÂ Â happen:

I know who reportedÂ me – it wasn’t Bryan. It’s the crazy guy who thinks Harris Corporation is putting voices into his head.

Social media companies are experiencing a wave of activist campaigns to crack down on supposed harassment and trolling.

While there have been actual examples of harassment and abuse, this movement is largely about censoring opposition to the social justice